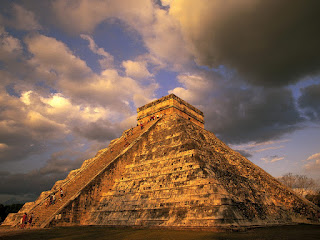 According to Christine Bouer in an ABC News article Gary Geryl, 51 years of age, quit his job as a laboratory worker for a French oil company. He had saved enough money to last him until December 2012. Geryl believed he wouldn't need any money after December 2012 because the world would end that at that time.

Geryl told ABC News, "You have to understand, there will be nothing, nothing left. We will have to start an entire civilization from scratch." Why does Geryl believe this? What would possess a man to save, plan, join a survival group, and gather survival goods and equipment?

Geryl believes the world will end December 21, 2012 because of Mayan Cyclical calendars. Apparently this calendar renewed itself approximately 5,125 years ago, but is set to expire in 2012 with "catastrophic consequences." He also relies on the ancient Egyptians who "saw" 2012" as a year of change.

The Mayans seem to be the first group of peoples to predict the end of the world in 2012. The Mayans had calculated the length lunar moon as 329, 53020 days. Is there any truth to this calendar?

The Mayan calendar was put together around 250-900 AD. The Mayans had a number of calendars for spiritual uses. Their calendars were used for social, agricultural, commercial, and even administrative purposes. The main use of the Mayan calendars was religious in nature. Each day on the calendar had a patron spirit that represented that each day had a specific use or purpose.

Most of the Mayan calendars were short. A calendar called "Tzolk" lasted 260 days. The Haab calender lasted 3654 days. The Mayans then combined the Tzolk and the Haab calendar to form what is known as the "Calendar Round." This is a cycle lasting "52 Haab's" or 52 years.

The Calendar Round was used to remember certain dates, like your birthday or an important religious date. You could not record a date older than 52 years.

The Mayan's came up with a fix. They expanded on the 52 year Calendar Round. Remember that their calendar had probably relied upon their religious belief's, the menstrual cycle, and some mathematical calculations using the numbers 13 and 20 with a dose of astrological myths thrown in. (You are going to base something as important on the end of the world on this?)

How does the calendar work?

Believe it or not the experts are divide about when the Long Calendar ends. Since the Mayans used the numbers 13 and 20 as the root of their numerical system, the last day marked on their calendar could be written as 13.0.0.0.0. This represents 5,126 years and corresponds to the modern date of August 11th, 33114 BC. The calendar renewed itself and ends 5,126 years later, which is December 21, 2012.

Will Time End or Is There A Problem?

The Mayan "Doomsday Prophecy" is based on a calendar which some experts believe has not been designed to calculate dates beyond 2012. Even Mayan archaeo-astronomers are divided over the issue of whether the Long Count is designed to be reset to 0.0.0.0.0. after 13.0.0.0.0, or does the calendar simply continue to 20.0.0.0.0 (8000 AD) and then reset again.

Due to the popularity of this discussion on the news, and the movie 2012; my kids have asked me if I believe the world will end in the new year. My response...It might. And then again it might not. We believe the Bible what is written in Thessalonians, Peter, and Revelation. The day of the LORD will come like a thief in the night.

Great post, Gregg! I'm catching up on blog reading. Did you move into your new place yet? Happy Wednesday! ☺

Very interesting. It reminds me of the panic for Y2K.

I thought the Mayan calendar was much older than that...could you please help me to understand how the 33,114 BC date figures into this? Did they make the calendar to count backwards from 250 AD (when it was made) to a time in the past they think the earth began?

I hope it don't end in 2012 as I have a special holiday, Daniel concerts and the olympic's to watch.

I remember when I was 16 they said the world was going to end on a particular day at 2pm I was terrified.

Have a good day.
Yvonne.


The country there has already gone to the proverbial Hell in a Handbasket, so how much worse could it possibly get on 12/22?

I'm not overly concerned about this. But I gotta say, those Mayans sure were into math.