Do Believers Have Guardian Angels? 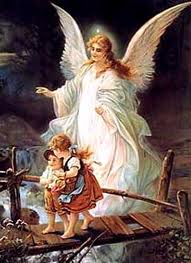 Today, it seems, more than ever, that we have an overabundance of preoccupation with the subject of angels. One cannot go into a Holy Hardware Store -oops, I mean Christian Book Store and not be inundated with images, sculptures, books, and whatnot's. Due to the popularity of angels in Christian circles publishers are pumping out books about angels and experiences with angels almost faster than they can be read.

One can hardly drive across town and not see angels on bumper stickers, dashboards, or as ornaments on the outside of the cars. Angels are displayed in windows, hung on doors,and made into wind chimes. The production of angelic trinkets has seemingly eclipsed the sale and distribution of the little silver statuettes of Dianna from long ago Ephesus.

Sermons, bible studies, small groups, and many para-church organizations have preached, taught, and studied this topic it seems, more so than any other theological truths in the Scripture. Yet for all this interest and study we seem to have added to an embellished what Scripture does have to say on the subject of angels. It cannot be argued that much ink has been used on this particular subject.

It is a commonly held opinion that Christians have guardian angles. The idea of "guardian angels" seems to come from Matthew 18:10, "See that you do not despise one of these little ones. For I tell you in heaven their angels always see the face of my Father who is in heaven." (Matthew 18:10, ESV) and from Acts 12:15, ESV, "They said to her, 'You are out of your mind.' But she kept insisting that it was so, and they kept saying, 'It is his angel!'"

Where did this idea of "guardian angels" come from? Why is it so prevalent in many religions and cultures? Is there any foundation for their existence? Can they be proven from or by Scripture?


During the period of time between the end of the Old Testament era and the beginning of what we now call the New Testament era, Jewish tradition was preoccupied with angels and heavenly beings. Much of this preoccupation was simply speculation and superstition. Some of it even spilled into the early churches. It seems to have been a problem in the church at Collose.

The Apocryphal book of Tobith reads, "Do not worry; our child will leave in good health and return to us in good health...For a good angel will accompany him; his journey will be successful, and he will come back in good health. (Tobith 5:21-22)

The challenge we face here is that the Apocrypha is not inspired. It was not accepted by the early church and Christians. It is a collection of tradition, Stories, and superstitions.

Roman Catholic teachings have added fuel to the fire of speculation concerning the existence of guarding angels. For example, Ludwig Ott, a renowned and highly respected Catholic theologian actually developed the teaching of guardian angles. He taught, "Every one of the faith [Catholic] has his own special guardian angel from baptism." 1

Ott goes on to further develop his idea of guardian angels by teaching, "...every human being, including unbelievers...have their own guardian angel from...birth." 2

John A. Hardon, another Catholic writer says, "a guardian angel is a celestial spirit assigned by God to watch over an individual during life...The role of the guardian angel is both to guide and guard; to guide as a messenger of God's will to our minds,and guard as an instrument of God's goodness in protecting us from evil." 3

There is absolutely no biblical foundation whatsoever to prove or even suggest the existence of guardian angels. The Apocrypha was rejected for it fancifulness in some places, its inclusion of superstition, and lack of evidence of inspiration. Catholic dogma has not been proven to be accurate. Their teaching on this subject is mere tradition and not biblically substantiated. We would reject Roman Catholic teaching on this subject.


So, it seems that while true believers have an innumerable supply of angles as their servants (Hebrews 1:14) the bible does not support the theory that each believer has a guardian angel. I believe God sends angels at times to serve, minister, protect, and to guide believers. I do not believe based upon the bible that we have a permanent or even rotating bevy of guardian angels to guard us.


Therefore, you do not have to worry about driving faster than your angel can fly! You could never drive faster than the sovereign and eternal purpose of God for your life!

Posted by Gregg Metcalf at 4:00 AM

I don't see what the fuss is. If all the angels we see in those stores are what angels are really like, they wouldn't be much as a guardian anyway! Those effeminate versions are from the same era as the sissified Jesus we all picture, from a time when many of the artists were themselves "effeminate" (to put it mildly) and their art reflected it. Now then, if I could have one of the terrifying brutes described in Scripture looking out for me, that I wouldn't mind at all!!

I think Shai Linne puts it well. Angels aren't "chubby babies with wings". We've domesticated God as well as his angelic messengers because we don't want to deal with His holiness.

Good presentation. Our Sunday morning Bible study has been on this topic over the past few weeks and the conclusion is pretty much what you've presented here. Our class leader points out that there is really not enough detail given in the Bible to come to many specific conclusions, but his explanation about the topic of guardian angels is pretty much what you said in your closing paragraphs.


Lee
Tossing It Out

Great post, Gregg. And I love your closing line... :D