I am completely appalled, angry, apprehensive, and anxious right now. My bewilderment and bombastic rhetoric is directed at both congregant and pastor of the local churches in this area. I am still retching and reeling from Sunday’s so called worship service. I have recently moved to Kelso and I thought I would take some time and check out the churches in this community. The last few weeks we have been visiting around the local churches of Kelso. 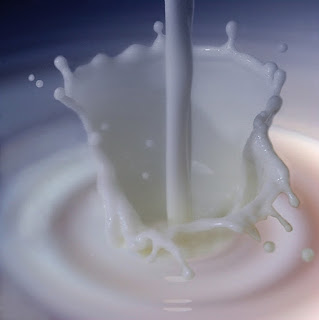 Kelso is a neighboring city of Longview. West Kelso and Longview nuzzle up together at Cowlitz Way and Washington Way. West Kelso and main Kelso are separated by the Cowlitz River which can be crossed by the Allen Street Bridge or the Cowlitz Way Bridge. Kelso is a small city of approximately 12,000 residents. Kelso has some 30 places or so that call themselves “Churches.” Of course only about a dozen of those 30 some organizations can even be considered close to being a representative of the bride of Christ.

My frustration and frankness stems from this sincere question: doesn’t anybody preach the bible anymore? Does anyone know how to pick up the scripture and from a literal, historical, grammatical, and contextual set of hermeneutical rules exegete a passage of Scripture? By this I mean explain and expound what the original author had in mind and what the original audience understood and make relevant application of the ancient text.

All that was offered at (imagine that the name of the church is here but obscured by a blue-dot) was a topical lesson on forgiveness. The pastor apparently found a verse that had the word “forgiveness” in it and placed that short verse on the bulletin cover. We did not have to open our bibles because no text was explained. As a matter of fact we were never referenced to the bible. A few scriptures were “yanked” out of context. By the way, because only a certain portion of the “proof-text” verse touched on the topic, the entire verse was not quoted nor appeared on the transparency.

I am appalled at how the bible is actually being handled, or really mishandled. I am anxious for the congregation that sits under such “tofu” week after week after week. How can one grow strong if the beef is never served during a meal? This wasn’t even milk. When Paul spoke of milk he meant the milk of scripture. Listen to him, “For though by this time you ought to be teachers, you need someone to teach you again the basic principles of the oracles of God. (Note: the milk is not topical porridge; it is the word of God, simple basic principles of God’s word) You need milk, not solid food, for everyone who lives on milk (basic principles of God’s word) is unskilled in the word of righteousness (emphasis mine), since he is a child.” (Hebrews 5:12-13, ESV)

A 20 minute sermonette of a topical idea precariously supported by strings of verses “ripped” out of context is not strong meat. No wonder that most of these believers never cash a check out of the rich account of their inheritance in Christ. No wonder the community remains unreached. Of course 30 minutes of 7-11 music was on the menu. What is that? You don’t know what 7-11 music is? That is music where the same seven words are sung 11 times.

Why won’t Johnny preach? Why won’t Johnny wrestle with at text until he knows the mind of the author and has a word from God? Church members and officers need to take great care that their pastor “works at preaching” and that preaching is the main point of his ministry.

John MacArthur made this point with eloquent force during his sermon to the 1990 Southern Baptist Pastors' Conference in New Orleans, Louisiana. How can church members encourage their pastor to make preaching his priority? Here are MacArthur's suggestions:

Fling him into his office, then tear the "Office" sign from the door, and replace it with a sign that says, "Study."

Take him off the mailing list. Lock him up with his books and his typewriter and his Bible. Slam him down on his knees before texts and broken hearts and the flick of lives of a superficial flock and a holy God. 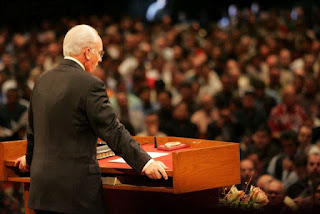 Force him to be the one man in the community who knows about God. Throw him into the ring to box with God until he learns how short his arms are. Engage him to wrestle with God all the night through, and let him come out only when he's bruised and beaten into being a blessing.

Shut his mouth from forever spouting remarks and stop his tongue from forever tripping lightly over every non-essential. Require him to have something to say before he breaks the silence.

Burn his eyes with weary study. Wreck his emotional poise with worry for the things of God. Make him exchange his pious stance for a humble walk with God and man. Make him spend and be spent for the glory of God.

Rip out his telephone. Burn up his success sheets. Put water in his gas tank. Give him a Bible and tie him to the pulpit. Test him, quiz him, examine him. Humiliate him for his ignorance of things divine.

Shame him for his good comprehension of finance, batting averages and political party issues. Laugh at his frustrated effort to play psychiatrist. Form a choir, raise a chant and haunt him night and day with, "Sir, we would know God."

When at long last he does assay the pulpit, ask him if he has a word from God. If he doesn't, then dismiss him. Tell him you can read the paper. You can digest the television commentary. You can think through the day's superficial problems and manage the weary drives of the community and bless the assorted baked potatoes and green beans better than he can.

And when he does speak God's Word, listen. And when he's burned out finally by the flaming Word, consumed by the fiery grace blazing through him, and when he's privileged to translate the truth of God to man and finally is himself transferred from earth to heaven, bear him away gently. Blow a muted trumpet. Lay him down softly and place a two-edged sword on his coffin and raise the tune triumphant, for ere he died he had become a Man of God.
Posted by Gregg Metcalf at 4:00 AM

WOW!!!!!!!!!!!!
I agree with you that Less are preaching from the Scripture. It is scary and most seem to like it that way.Not realizing that it is leading many to destruction... Johnny Mac is wild..what a great descriptive way to get the preacher to PREACH. ha ha

I totally echo your concerns, and that quote... WOW!

I know exactly what you mean, even in "conservative" churches there is rarely the event of Scripture being taught accurately.

Love the MacArthur selection, that is powerful.

Brother, you are so right on this. Sadly, we find ourselves "settling" for lame or mediocre, rather than "firing". I wonder if politics and economics within the Church have a lot of influence on this issue.

That advice from "MacArthur" is actually taken directly from an article written by Floyd Doud Shafer, published in Christianity Today on March 27, 1961. Hopefully he credited the original author.