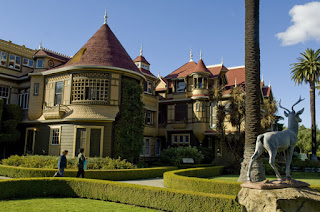 Growing up in San Jose, CA I had occasion to more than once visit the Winchester Mystery House. This house was owned by Sarah Winchester, the wife of the famous gun mogul William Winchester. Mrs. Winchester kept this house under construction for 38 years. Construction began in 1884 and continued non-stop around the clock until her death on September 5, 1922. Her home had no master building plan. With no master plan this seven story mansion is famous for stairways that lead to "nowhere," doors that open to walls, and passage ways that lead to nowhere. Of course the home is also famous for the extravagant conveniences of its time. Mrs. Winchester spent nearly 5.5 million dollars on this strange, extravagant, and spooky house. 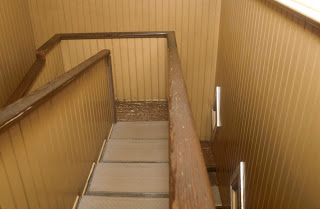 Why did she do this? There are a few legends that are part of the mystery and romance of this former mansion and residence. The most popular legend is that Mrs Winchester upon being troubled, consulted a medium in regards to her fears of being haunted by the spirits of all those who died as a result of her husband's repeating rifle. The medium supposedly told her that if she kept building it would ward off all the spirits of those who were killed by those who bought her husbands's gun. That is precisely what she did. She kept building. My emphasis this morning is on the halls, walkways, staircases, and such that lead to nowhere. They were ordinary and useful items but served no purpose because they led to nowhere.

Apparently Rick Warren of Saddleback Community Church and Purpose Driven Life fame is building a bridge. I don't think he is building a bridge because he is haunted or is attempting to wield off unfriendly ghosts. Nevertheless, his bridge goes to nowhere. As a result this bridge is just as useless as any staircase in the Winchester Mystery House that leads to nowhere.

Apparently Warren has embarked on a mission to heal relations between "evangelicals" and Muslims. Warren is attempting to partner with southern California mosques in hopes of proposing a set of theological principles that prove Muslims and Christians worship the same God. There is an agreement in place not to "evangelize" either group; Christians or Muslims. 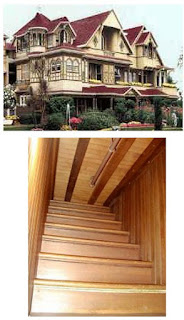 It is one thing to develop a commitment and ministry to reach out to Muslims and expose them to the gospel and the God of the Bible. However, it is another thing to deny they reality of the Bible and the Koran in order to conclude that both Muslims and Christians worship the same God. I would never advocate refusing to evangelize the Muslims. The evidence is clear that Biblical Christians and Muslims do not worship the same God. Any attempt to build such a bridge will result in a bridge that is built to nowhere.

It seems that some men never learn. They never learn how clever Satan truly is. God has given the church the Great Commission to evangelize the world. It is the mission of every believer and local church to serve as ambassador's of Christ sparing no effort to preach the gospel to every living creature. It seems the easiest way to stop this evangelization of the world is to convince "the church" that certain people groups, ethnic groups, or religiously affiliated people do not need evangelized.

There have been those through the years proposing the the church does not need to evangelize the Jewish people. Then ECT (Evangelicals and Catholics Together) in versions I and II came along proclaiming we didn't need to evangelize Catholics. Now it seems thanks to Rick Warren's attempt to build a such a bridge to Muslims we won't need to evangelize them. Sorry, Mr. Warren, you can place the Koran and the Bible side by side and you will not find the same God in each document. As Sarah Winchester did for 38 years, you are building your bridge to nowhere, irregardless of how pure your motives may be.
Posted by Gregg Metcalf at 4:00 AM

This was great to read Gregg.
I saw the sign for San Jose whilst I was in CA.

Have a great day,
Yvonne.

Very sad, but I'm not surprised given Warren's track record. I'm curious whether there will be any comment from Piper about this.

I can understand how a new believer might think along these lines, that Muslims worship the same God, but not a seasoned, seminary-trained, evangelical pastor!
I really think there is more to it than Mr. Warren being deceived...I think he is milking the "fame" cow and serving himself, without thinking of anyone else.
Woe to the leader who becomes proud of his position.

Rick Warren is one of the most dangerous men in professing Christendom as I stated a couple of years ago. You can listen to what I said by going to http://www.takeheed.net/Take_Heed_2010/Current_Concerns/May_2010/Isle_of_Man_Messages_by_Cecil.htm
It is the first message listed.
Cecil Andrews
'Take Heed' Ministries
Northern Ireland
www.takeheed.net

Judge not lest ye be judged. Jesus himself surrounded himself with the sick and prostitutes. He said build a bridge open communication, not climb in bed.

Read what scripture says about speaking ill of those God has ordained. No, not all are good, because all are still human. But that's where God is incharge. No man should follow any man, but God can speak through any man when you stop judging and listen.

Read what scripture says about speaking ill of those God has ordained. No, not all are good, because all are still human. But that's where God is incharge. No man should follow any man, but God can speak through any man when you stop judging and listen.