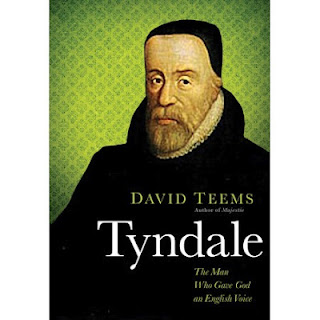 The author’s purpose in writing this book is found in the prologue, p. xv; it is written in contrast to his book Majestie. Teems states that “Majestie laughs where Tyndale must grit its teeth. Teems states that this book will inform, amuse, and even entertain. He claims his book will even bewilder the reader. Teems explores the man William Tyndale in an age where Henry VIII, Anne Boylen, Mary I, Martin Luther, and the Roman Catholic church create what he calls “a rather humorless age.”

Theme: The effects of Roman Catholic domination on dissenters.
Thesis:  Roman Catholic dogma protected and promoted by persecution of any considered as dissenters nearly prevented the translation of the bible into the English language.

Teems uses narration as his means to tell the story of who William Tyndale was, who he became, how his translation came about, and how the Roman Catholic church used its power to kill and destroy all those who opposed their doctrine and organizational structure.

With very little information available and known about William Tyndale, Teems does an excellent job on describing the times, the players, and the overall atmosphere that was present as William Tyndale became the first to translate the bible into the English language. Tyndale’s life was brief, just 42 years, but his legacy is undeniably the most important gift to the world since the giving of Jesus Christ by God the Father as a sacrifice for his people.

Teems goes into great detail about the age in which Tyndale was born and lived in order to give us an idea of what made this man what he was. Tyndale had a great passion for placing the Scriptures in the hands of the common man. He was uniquely gifted for languages and is credited with introducing extraordinary words and phrases into the English language. It is often reported that he was responded to a critic with this famous quote, “If God spares my life, ere many years, I will cause the boy that driveth the plow to know more the Scriptures than thou dost!”

With narration Teems weaves the information that we can verify concerning Tyndale’s life with the philosophical, intellectual, spiritual, religious, and practical dimensions leading up to is birth, his life, his monumental work, and his eventual death. Teems uses this information to demonstrate why it was so necessary to translate the Scripture into English and why the Roman Catholic hierarchy fought it so strenuously.

Teems traces Tyndale’s youth, education and his life. He gives us insight into the exile that Tyndale faced and his subsequent execution.

Tyndale is an extremely interesting book to read. It held my attention all the way through. Teems has done an excellent job on research of the people and events surrounding Tyndale and his translation. The reader will find a wealth of historical information. There is a complete section of end notes, appendix, and a bibliography.