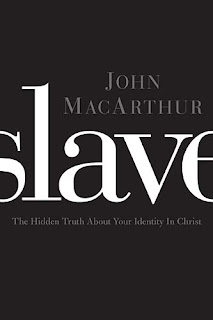 John MacArthur is the pastor of Grace Community Church, President of Masters College and Masters Seminary, Featured Bible Teacher on Grace to You, noted author of over 150 books selling over 1,000,000 books, author of The MacArthur New Testament Commentary Series. Theologically MacArthur is a dispensationalist, Calvinist, and a strong supporter of expository preaching.

This book is the result of an all-night flight to London, England in the spring of 2007 while reading Murray J, Harris's Slave of Christ. While reading this book MacArthur states that, "I realized there had been a centuries-long cover-up by English New Testament translators that had obscured a precious, powerful, and clarifying revelation by the Holy Spirit."


MacArthur writes this book to disclose what he considers to be a colossal phenomenon, namely, that all English bible translator regardless of version or translation have mistranslated the word  δουλος (doo’-los) as servant rather than as slave. Dr. MacArthur's contends that there is a key distinction between those two words. MacArthur argues that servants are hired and slaves are owned, servants maintain self-autonomy and personal rights while slaves do not enjoy or experience freedom and they have no personal rights whatsoever. As a matter of fact, the author maintains that we do not fully understand what it means to be a "Christian" without having a proper understanding of what it means to be a slave.

After much anticipation of this book amongst all the normal and typical hype of this book from the magnitude of this author I was somewhat disappointed. The book is any easy read and is very informative. It is well researched and documented, the footnotes alone could comprise an additional book. MacArthur or possibly Thomas Nelson chose to use some hyperbole and drama to promote this book I hardly think that a massive and colossal cover-up existed by each and every translator. The exaggeration may have been unintentional or "literary license" but certainly doesn't explain the usage of the word servant rather than slave.

With exhaustive research, MacArthur thoroughly explains what it meant to be a slave in various periods of history,  drawing heavily on the period of Roman slavery. He then uses this imagery, definition, and background to explain what it means to be a Christian. Without attempting to minimize the massive amount of work that went into this writing it is really a different perspective of what has been derisively labeled "Lordship Salvation."  MacArthur states, "As those who confess the Lordship of Christ, believers are duty bound to obey Him in everything."


Slave deals with the topics of sin, bondage to sin, redemption, and adoption from both a historical reference in the Roman legal system and the scriptural and spiritual system. Pastor MacArthur writes extensively on the depravity or inability of man, election, limited or particular atonement, irresistible grace and the perseverance of the saints. These theological concepts have been encapsulated in the acronym TULIP and are also known as the doctrines of grace. MacArthur brings his long and biblical stand against "cheap-grace" or "easy-believeism" and gracefully levels it with his presentation on what salvation by grace truly comprises.

This is a well written and extremely thought out work from this premier pastor and bible teacher. It is easy to read and to stay up with the author even amidst the theological topics and biblical doctrine. It held my attention and I found great help to my own Christian walk. Even though it is somewhat of a "re-hash" of The Gospel According to Jesus, Ashamed of the Gospel, and The Gospel According to The Apostles and his position on Lord-ship salvation this is a valuable book for the church. It deserves to be read and discussed. This book has the capability of putting to bed any doubt on what it means to be a Christian.


Disclosure: I received this book free from the publisher through the BookSneeze.com book review bloggers program. I was not required to write a positive review. The opinions I have expressed are my own. I am disclosing this in accordance with the Federal Trade Commission's 16 CFR, Part 255: "Guides Concerning the Use of Endorsements and Testimonials in Advertising."
Posted by Gregg Metcalf at 3:00 AM

Seems like an excellent book, you rfeviewed it very well. It must be hard to review a book.
Hope it does well.

Have a good day.
Yvonne.

It sounds like an interesting read. I would love to review books! So much to read, so little time. I love the tulip on the sidebar;)

Thanks for the review. I was tempted to get this in the bookstore yesterday but passed since I haven't read his earlier book Ashamed of the Gospel. I saw the trailer and thought it was a bit overly dramatic about a coverup.

Thanks for the review Gregg. He makes an interesting delineation between slave and servant. Seems to be in accord with Calvin in that slaves do not have a choice. What does He do with John 15:15?

First of all, I'm glad your reviewed this book as I've been gazing at it for a couple of weeks now. And lucky you! I started to review books for booksneeze...got a silly Sheila Walsh book that is so silly I can't finish it and never did a review! What a good book to review.

Second, I seriously thought of emailing you about "Lordship Salvation." Wondering if you had posted on it before or would post in the future. I listen to Paul Washer a lot and many times when you search his name you get this "false prophet" stuff that goes into his ties to Lordship Salvation. I first heard the term from a Dutch Calvinist minister that I know. I'm guessing he goes along the lines of what we would call easy believism. Just wanted to know more about it. (Don't want to get too off track...just running that by you!)

Thanks for the book review!

Looks like a keeper! Our pastor uses the term slave of Christ frequently also.
Thanks for a great review!