What Are You Praying For? 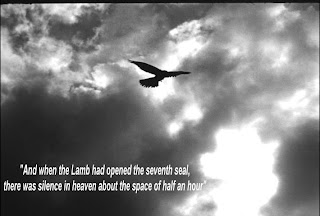 "...there was silence in heaven for about half an hour...the prayers of the saints...rose  before God..." Revelation 8:1,4 (ESV)
My devotional reading yesterday morning (this morning as I journal this) was in the Revelation of Jesus Christ, Chapter Eight. This is a very moving and awe inspiring portion of Scripture. Among many the things that are seen and gleaned in this chapter we see the prayers of the Tribulation Saints. We get an idea of what they are praying for and what encompasses their attention. I began to think about what encompasses my attention and what for what am I praying?

I think I am praying for the normal things that most people would pray if they were in my circumstances. I am praying for:
In Revelation eight I saw a different "prayer list." The apostle John sees the Lamb, Jesus, the Christ, open the seventh seal. This is such an awful, solemn, and sober event that all of heaven falls silent for approximately thirty minutes. Until now John had heard quite a bit of noise in heaven, hadn't he?
Now, thirty-minutes of silence. Why? Silence is the only response to divine judgment. These seven angels who stand in the very presence of God were given trumpets. These trumpets were cataclysmic judgments on this earth.

I don't know if I could be silent for thirty minutes before I prayed. Do you? Have you ever sat for thirty or more minutes simply listening for God?

John talks about the altar and the incense. The incense represents the prayers of certain saints.

"And another angel came and stood at the altar with a golden censer and he was given much incense to offer with the prayers of all the saints on the golden altar before the throne, and the smoke of the incense, with the prayers of the saints, rose before God from the hand of the angel." Revelation 8:3 (ESV)

There are three things that I discovered as I meditated and prayer through his passage:

The saints are probably the believers who are being persecuted and are exposed to the blasphemy against God during the time of the Tribulation Period. (This means that those who are offering to pray, with incense from some golden altar for a fee are making their offer to soon, shame on you TBN crowd.) These prayers are not from the church age, but more than likely will be the prayers prayed by God's people during this awful time of judgment.

The saints are probably praying for God to end the persecution and blasphemy against God. The content of the prayers revolve around judgment and restoration. These prayers seem to include petitions for:

The saints were right in praying for judgment. Their prayers are affirmed by the incense with God provided which shows He is in agreement with their prayers and cries. God will release in response to His sovereign plan and their prayers the seven trumpet judgments.

So, there is a sense of anticipation as these prayers come up to God from these dear persecuted and molested saints during the tribulation. Their prayers will shortly and certainly be answered. It seems that there is a connection between the prayers of God's people and God's wrath.

Just asking
Posted by Gregg Metcalf at 3:00 AM

I pray for world peace, also sefishly I pray that a woman's health issue I have WON'T lead to cancer.

Excellent post, Gregg. Prayer is the one place I continue to struggle. My mind has a very difficult time shutting out everything else to concentrate on prayer alone. While I know I could sit still and quiet for 30 minutes, I'm fairly certain my mind would not be quieted. I have thousands of thoughts racing through it continually.

We pray every night for Jesus to return. Maranatha!

Great message Gregg. I will lift you and your family up to the Lord in prayer. I have studied and meditated on the book of Revelation for years and I know that one day all of it’s prophesy will be fulfilled. In God's timing He will destroy all evil and gather His children to Himself. There will be no more sin, no more pain nor sorrow and God Himself will wipe away all of our tears. Blessings my brother in Christ. Lloyd

Somber post, bro. I remember a song that used to be in our hymnal when I was a kid, "Let all mortal flesh keep silent, and with fear and trembling stand..." I don't remember the rest right now, but I know it's not in our hymnal any longer. THAT God has been largely forgotten. Your scripture reference shines light on an oft forgotten attribute of our Holy God. Amen, Maranatha!

Thanks for posting this. It definitely puts our concerns in perspective to think of them in the light of Jesus' return. May He come soon!

Thank you for this powerful reminder. Yes, I do pray the Lord would return soon - specifically that He would herd that last sheep through the gate and take us away!
Those passages always blow my mind!!

Have a wonderful Christmas Gregg.
(still praying for that job too!)

something to truly meditate on. the thought of this post makes me want to go sit in silence before God and then give Him my long list of thanksgivings and praises, He is way too good to me.