The Obituary of December 1552 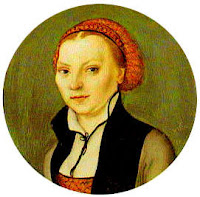 December 20, 1552
Former nun Katherine von Bora, Martin Luther's wife from 1525 to Luther's death in 1546, dies.
In 1552 the plague broke out in the City of Wittenberg. The university had relocated to Torgau. Katherine decided to go there too.
On the way she was thrown from the wagon on the edge of a lake and was lifted out of the water severely bruised. She did not recover from this accident but died three months later at the age of fifty-three. She made this statement on her deathbed; "I will cleave to my Lord Christ as the burr to the cloth."
******************************
Happy 15th Birthday to my granddaughter, Madilynn Nicole Metcalf of Vancouver, WA
Posted by Gregg Metcalf at 3:00 AM

I don't know that I even recall Martin Luther having a wife. I always hear about him, never her. I'm going to have to do some digging around and see what I can find out about her. Thanks for sharing.

That's something new I have learned today.

Also a happy birthday to your grand daughter.


WARNING: Do NOT click on the following link unless are fully prepared to have a sappy chorus of "Papal Bulls, Indulgences and Transubtantiation" running through your head all day. The Reformation Polka!

" as the burr to the cloth." Wonderful!! This will be great to share during our Group Time today!

You have a 15 year old granddaughter? Wow.

"as the burr to the cloth." - what great imagery.

merry Christmas,
to y'all

If it be God's will that I'm allowed a death bed statement I pray it would be similar to Katherine's.

Brother Gregg, I hope you and your family have a Wonderful Christmas :-)