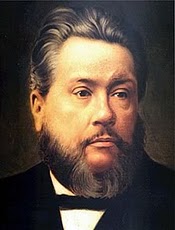 Spurgeon (1834-1892) was born in Kelvedon, Essex, England, June 19, 1834. Since his father and grandfather were pastors, he was raised with the knowledge of God and the gospel. He was converted on a snowy January morning in 1850.

In August of 1850, Charles Spurgeon preached his very first sermon to a group of farmers. A year later a small village church called him to be their Pastor. In 1854, when he was only nineteen years old, Spurgeon was installed as the pastor of the New Park Street Chapel in Southwark, London. New Park Street Chapel eventually became the famed Metropolitan Tabernacle.
In January of 1855 Spurgeon's sermons were published each week. His sermons were published every week through 1916. This was twenty-four years after Spurgeon had died.
During Spurgeon's pastorate in London, he ministered to a congregation of approximately six thousand people each week. Spurgeon published a monthly magazine called The Sword and Trowel. He founded a college for pastors, two orphanages, a home for the elderly, and several mission points where the gospel was preached.
Spurgeon suffered greatly both physically and mentally during his life and ministry. He had many opponents who attacked him and his ministry. Spurgeon remained faithful to the gospel and the Word of God and preached until he died in January of 1892.
The keys to Spurgeon's "success" seems to be very simple: a life of regular and fervent prayer and a simple, yet profound faith in the grace of his Lord and Savior, Jesus Christ.


There is no way on this side of heaven to measure, gauge, evaluate, or determine the impact of this man and his ministry to church and Christian community. One of my purposes for this blog is to expose you to Godly men of various generations and their legacy. The overwhelming majority of those who read this blog are familiar with Charles Spurgeon. However, even though you may be aware of him and some of his more popular quotes and quips you probably have not spent much time pouring over this man, his ministry, his messages, and his mission.

I encourage you to begin taking some time and study this great man - what drove him, what moved him, and become a benefactor of his books, sermons, lectures, and ministry. Begin with these links, book-mark them and visit them often:

spurgeongems.org
Posted by Gregg Metcalf at 3:00 AM

Very interesting post about a fellow Englishman.
I enjoyed it very much.

Thanks also for the visits and kind comments you so kindly left. I do appreciate them.

I am currently reading a Charles Spurgeon biography that I will pass onto my dd.

You mention his sufferings both physical and mental...a wonderful thing for us to remember. God has not promised us lack of suffering, quite the opposite.
6000 members! That is a "mega church" with some meat indeed.

Spurgeon's sermons and writings had a big impact on my life. Thank God for His faithful servants.

(www.spurgeongems.org is another great resource with his sermons in .pdf format for download.)

I have to be careful here, because my opinions of CHS border on idolatry, which he himself would abhor. He was truly a man greatly used by God, and is still being greatly used. I have his complete works on the computer, a late 1890s 20 volume set of his sermons, and have had the privilege of sitting in his library (the college I attended purchased it years ago, where it sat in the basement of our chapel, and now is at Midwestern Seminary in KC, MO.)

He obviously has had a great impact on my life, and I am thankful for his faithfulness. Thanks for the post.

Great post with lots of information about C. H. Spurgeon. I have always enjoyed reading his writings. Blessings, Lloyd

Thanks Gregg! I did not know about the orphanages or the home for the elderly. He was an amazing man.

Gregg, thanks for the challenge and the links :-)

I've read a little about him, read some of his work, and heard people speak about him, but I know little otherwise. I do know he has had a big influence on modern Christian thought.
I have looked at most of those sites in the past when I was doing Bible study.

Lee
Tossing It Out

Spurgeon leaves me speechless much of the time. In relation to Ma's statement, I was left with a whole new view when I reading Spurgeon on Prayer. A brief biography explained to me the multitudes that would show up to hear him preach. My view on "mega churches" changed...I always felt before if there are that many people there...God probably wasn't. I can't say that with Spurgeon so I ate my words!