Book Review: The Seeds of Turmoil 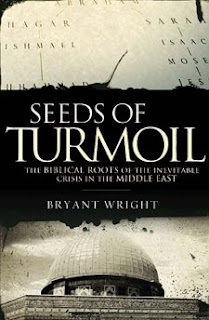 Book Review: The Seeds of Turmoil
Almost every day one can turn on a television, open a newspaper, or even turn on a radio and hear of horrible atrocities attributed to terrorism. Thanks to satellites and instant communication we can see bombings, shootings, and the aftermath produced by people we call terrorists. As Americans we have followed our political leaders in assigning this term, terrorist, to huge blocks of people in various Middle Eastern countries. The United States has declared war on terrorism and has committed huge resources, American lives, and political cache to wage and hopefully win this war against terrorists and terrorism.
The subtitle of this book is The Biblical Roots of the Inevitable Crisis in the Middle East. Pastor and author Bryant Wright takes us on a journey explaining the past, the present, and the future of the terrible trouble of the Middle East. Wright explains very carefully, concisely, and coherently what the average American does not know about this so called war, or Middle East problem.
Wright divides the Seeds of turmoil into two parts. In Part One, Wright provides us with eight chapters in order to uncover the founders of this conflict. Using Scripture Wright effectively demonstrates how one man’s decision to take certain matters into his own hands is responsible for the fighting taking place today. Wright uses Scripture to show the effects of Abraham’s actions that led to the birth of Ishmael which instigated this conflict. Wright demonstrates how the actions of Abraham, Sarah, and Hagar are the actual root of today’s Middle Eastern turmoil. Wright effectively uses the Scriptures to demonstrate that God promised a definite detailed land to Isaac, a son of God’s promise to Abraham.
Conflict arose almost immediately between the women, Hagar and Sarah and the boys, Ishmael and Isaac. The Middle Eastern problem is a religious problem. It is two nations believing that they have been given the land and promises by God through Abraham. The descendants of Ishmael and Isaac are fighting for the land and those promises. This conflict will not end until Jesus Christ comes and enables Israel to realize the absolute fulfillment of God’s promise through Abraham to Isaac. Peace will not be forthcoming by military might, peace negotiations, or compromises. Any help given to the enemies of Israel will be disastrous on the nation or nations rendering such aid. These two enemies will continue to fight until the death and the absolute surrender of one of them.
Wright uses part two of Seeds of Turmoil to show the perspectives of those who are involved in or have stakes in this conflict. He dedicates a chapter each to the Jewish perspective, Isaac, the Islamic perspective, Ishmael, and the Christian perspective, Jesus Christ. Wright skillfully and scripturally explains where each side is coming from and why they think like they do.
This is a very well written book. It is very easy to read and to follow. It rarely is technical and is very informative. I like this book because it scripturally and coherently outlined the very basis of the root of the Middle East conflict. This book held my attention which caused me to read it through the first time in two sittings. I highly recommend this book first to all believers in order to have the proper perspective of this horrific conflict. I highly recommend this book to all Americans in order to fully appreciate the nature of this conflict. The descendants of Ishmael believe they are as right in their conflict and that God, Allah, is on their side as the Israelites believe that they are right Unfortunately Israel is fighting this war from a military and national perspective having forgotten the promise made so long ago to Abraham that God would bless him and the world through a son of promise, namely Isaac.
I have received a free copy of this book from Thomas Nelson Publishers in order to review this book and have received no other form of compensation. This opinion (s) expressed in this review are my own and not necessarily of Thomas Nelson Publishers or Bryant Wright.
Posted by Gregg Metcalf at 3:00 AM

Sounds a good book to read, you gave an excellent review,


Thanks for the visit and the comment. I chose that song The Family Bible as I've heard Daniel sing it but his version wasn't on the link I get my music, but so George's version and thought you may like to hear it,

This sounds like a very interesting read on an age old topic make relevant by today's headlines.

I do think most people do make some Biblical connection about the Middle East problem but strangely choose to push it aside. I hear frequent references in media and entertainment to prophecies found in the Bible, but they are often treated in jest or relegated to fantasy and science fiction. It's amazing to me that more news commentators and journalists don't more connections between current events and prophecy.

It's almost as though most people want to avoid the topic in hopes that God and Christianity will quietly go away. Fear of offending others, political correctness, and secularism have cast a veil over the public eyes so that they don't recognize what is going on even though the truth is evident for those who see it.

Lee
Tossing It Out

I received a comment that i should read a book by A.W. Tozer titled "The Purpose of Man". I have a combination book of Tozer's "The pursuit of God" & "The Pursuit of Man". Have you read any of these, and if so, what is your reveiw? Thank you.

Yvonne - thanks for both your kinds words about the review and for using George.

Lee - the book is a good read. The conflict has been in existence for centuries but is definitely in the headlines due to press coverage and instant communication.

Brian Todd - I have read and re-read Tozer's Pursuit of God - it is an excellent book with great truths. I highly recommend it. I have not read the other two.