The purpose of this book is to fill a void left by the death of the subject. Many people had hoped that after Lloyd-Jones retirement from Westminster Chapel that he would find the time to write an autobiography. Apparently Lloyd-Jones did not write in order to be published. He also disliked any type or form of personal publicity. As a result, Lloyd-Jones never wrote an autobiography. The difficulty in producing such a work is seen in a statement made by the author in the introduction;

In view of these considerations it required no great foresight on the part of anyone near to Dr. Lloyd-Jones to anticipate the need for material to be put by so that a record of his life might appear posthumously. Intermittently, over more than twenty years prior to his death, the present writer sought to accumulate information - the most important source being Dr Lloyd-Jones himself. When I hesitantly disclosed this fact to Dr Lloyd-Jones in 1974 he made no response whatsoever. But at least I had not suffered a prohibition! 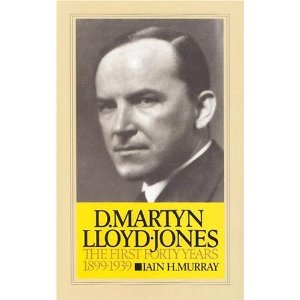 The author wrote this biography "so the record of a number of things in Dr Lloyd-Jones's life and ministry would not be lost..."  It is Murray's opinion that, "we have lost a leader who, in our generation at least, cannot be replaced."

The author develops and supports his thesis through a very well crafted narration. Murray tells the story of the first forty years of the life and ministry of Martyn Lloyd-Jones in an orderly series of events which he presents in a chronological order. Murray places great emphasis on the events that shaped and developed the man during those first forty years.

Murray begins with ML-J's early birth and childhood tracing him to his time at St. Bartholomew's Hospital as a doctor, to a struggling Calvinistic Methodist Mission Church in Aberavon, South Wales. Murray provides colorful detail in his narration of ML-J as a schoolboy, dairyman's assistant, political enthusiast, doctor, and pastor.

This book is extremely interesting and easy to read. Murray's accuracy lies in the fact he was able to gain the consent of ML-J who gave him whatever help he could. ML-J was involved with Murray and the writing of this book until the subject's death in 1981. Murray also relied on assistance from Mrs. Martyn Lloyd-Jones. She had preserved a private cache of press-cuttings for more than fifty years. Murray had access to a box of ML-J sermons to evaluate his subjects thinking in his own words.

Murray, although a great friend and fan of ML-J seems to have been able to remain objective in his writing. ML-J was obviously a very gifted and unique individual, but Murray refrained from undo embellishment and "hero-worship."

This book is extremely valuable and of great importance. It gives us a needed account of this godly man. It also gives us background and history of both the times and Christianity surrounding this man and his ministry. It is an extremely useful tool to any believer. I agree with Murray that this is a much needed work.

Iain Murray has been in the Christian ministry since 1955. In 1957 Murray co-founded The Banner of Truth Trust serving as the senior editor until 1996. Murray served as an assistant to Dr. D. Martyn Lloyd-Jones at the Westminster Chapel. Murray pastored Grove Chapel in Camberwell, London and St. Giles Presbyterian Church in Sydney. He is has authored numerous books including a number of biographies. He is amply qualified to write this biography of Dr. Martyn Lloyd-Jones.

As ML-J's assistant he certainly is qualified to write this remarkable account of this wonderful man of God. Murray was connected with the philosophical nature of ML-J by virtue of being like minded as he served with him.

This book is replete with footnotes. It has a single appendix after the final page. It has an extensive and useful subject index. These footnotes provide additional information as was as documentation. They certainly help clarify and even extend points made by the author in the main body.

In summary this book tells in detail the story of a non-descript medical doctor who was gloriously redeemed and then called into the ministry. It tells the story from the birth of this great man to his first year in the pastorate of the famous Westminster Chapel. It tells of his conversion, his call, his struggles, his dedication and devotion to his Lord. My general conclusions are as follows: this is a much needed, well written, well documented account of the life, times, and ministry of a unique man of God. This is also a very valuable work that will be a blessing to any one who reads it.

The principle topics of Murray's book is the rearing of ML-J, his call into the ministry, and then the philosophy of ministry of ML-J as he served faithfully from 1899 until 1939. This is in fact "a remarkable story of the formative earlier years of Martyn Lloyd-Jones which is now told for the first time.
Posted by Gregg Metcalf at 5:00 AM