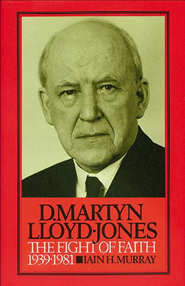 The purpose of the author in writing this volume was to record the abundant material related to the life of Dr. Lloyd-Jones as he "lived in more than one world" at the same time. According to the author, "For all most all the years covered by this volume their was little happening of an important Christian character with which he was not in some way related. Murray was able to record more of the life of Lloyd-Jones since he collected many personal notes of events and conversations.

Just as in the precious volume, Murray uses narration to develop his thesis. Murray tells the story of Lloyd-Jones life, ministry, and impact on Christianity through a series of events in a chronological order. Being the skilled writer and biographer that he is, Murray often utilized argument to persuade and establish the veracity of many of his analysis and conclusions about Lloyd-Jones impact and influence on Christianity.

With regards to evaluating this volume for interest, accuracy, objectivity, and importance, it suffices to say that is an extremely valuable and important piece of writing. First, I found this volume, as the last, to be of extreme interest. Lloyd-Jones was quite a character. He was a tremendous student of scripture with a keen mind. The times and events both secular and spiritual that he lived through made very interesting reading. This book purports to be of extreme accuracy due to the fact that the author was an assistant of Lloyd-Jones, personal friend, and had access to the subject. Murray was able to collect material, make notes, authenticate, and verify much of what he wrote long before he put the first words of this biography on paper. The danger Murray faced was constantly before him of not being objective. However, as I read this volume I believe Murray was very objective. He never gave into "idol" worship nor did he make his subject out to be anything more than a sinner saved by grace.

This book delves in matters of pastoral ministry, evangelism, real Christianity, and the various "isms" that threatened biblical Christianity during Lloyd-Jones life time. Matters of separation, ecumenical ism, the eroding confidence in the scriptures, and even Billy Graham are covered in depth as they relate to, affect, or affected by Lloyd-Jones.

As far as the qualifications of the author, Iain Murray has been in the Christian ministry since 1955. In 1957 Murray co-founded The Banner of Truth Trust serving as the senior editor until 1996. Murray served as an assistant to Dr. D. Martyn Lloyd-Jones at the Westminster Chapel. Murray pastored Grove Chapel in Camberwell, London and St. Giles Presbyterian Church in Sydney. He is has authored numerous books including a number of biographies. He is amply qualified to write this biography of Dr. Martyn Lloyd-Jones.
This book is replete with footnotes. It has a single appendix after the final page. It has an extensive and useful subject index. These footnotes provide additional information as was as documentation. They certainly help clarify and even extend points made by the author in the main body.

Although quite voluminous, some 830 pages, I whole-heartily recommend this book to every Christian. This book is well worth reading. I was mesmerized by the life and times of this truly gifted yet humble man of God. May God give us more men like Dr. D. Martyn Lloyd-Jones

Posted by Gregg Metcalf at 6:00 AM