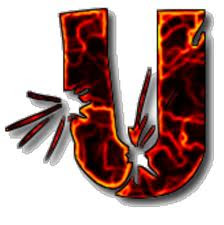 I was contemplating which word I would use for the letter “U” when I came across the word “ucalegon.” When I saw this word I realized that I have had at least one ucalegon in my life time. I was very sorry for the occasion that afforded me an ucalegon. It was a very frightening experience. I hope none of you ever have an occasion where you discover that you have an ucalegon.

You wonder how I discovered that I had an ucalegon. Well, it only takes a moment to share this harrowing experience with you so I shall.

My Mother and Father were vacationing at my home in Vancouver, WA from Modesto, CA in the summer of 2005. We were sitting at a card table that my wife had set up in our living room playing “Spades.” As we were sitting at the card table playing Spades my father quietly announced that he smelled smoke.

Neither my parents nor Irene or I smoke so we decided that we might be mistaken. As the game progressed my Father became more certain that he smelled smoke. We opened our front door and did not detect a reason for our surmising’s. We then exited out back door and stepped into our yard and we were immediately confirmed in our suspicions.

Our neighbor’s home was on fire. Flames were racing heavenward from a bedroom window. We yelled for the women (my mother and/or wife) to dial 911 as my father and I ran towards the ucalegon.

Upon reaching the house we vigorously banged on the front door and rear door in hopes of rousing any ucalegon who might yet be inside. Arousing no one, we continued to shout “any one home – any one inside?” In a very short time the Vancouver Fire Department arrived on the scene and entered the home. They did not encounter our ucalegon and they heroically fought the fire until it was defeated.

There you have an account of my only known ucalegon. I hope to never have another. I trust that fate will also spare you, my dear reader from ever having an ucalegon of your own.

What’s that? You still don’t know what an ucalegon is? An ucalegon is a neighbor whose house is on fire or has burned down. My neighbor’s house had caught fire.

How? Well, it seems that as a part of a sensuous “after-noon delight”, our neighbors had lit some candles. When finished they apparently forgot about the candles and left their home. The candles burned down catching the carpet on fire which then spread to the bedrooms wall. It was but a short time that the entire back portion of the house was ablaze.

Now you know the rest of the story!
Posted by Gregg Metcalf at 4:00 AM

Fire is a very frightening expereience Gregg I bet you were scared.
A good word....one I had never heard of until today.

I would have never guessed. That must have been a horrendous freight. So glad the ucalegon was not at home!

What an interesting word.

I'm a candle burner and a few times (really, just a few) I've left a candle burning. Eek. I better be more careful!

Who would've thought that there was a specific word for that! I also hope I never experience an ucalegon. Great post.

how scary! I've never heard of this word before, either.:)
Nutschell
www.thewritingnut.com