God Glorified In Man’s Dependence
Your Weekly Exposure to Edwards 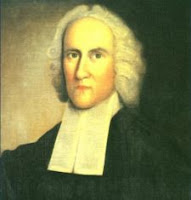 Gospel Driven Disciples posts some highlights from the prolific works of Jonathan Edwards. The following excerpt is taken from his sermon entitled God Glorified in Man’s Dependence, preached on the Public Lecture in Boston, July 8th, 1731.

I Corinthians 1:29-31 - “…so that no human being might boast in the presence of God. And because of Him you are in Christ Jesus, who became us wisdom from God, righteousness and sanctification and redemption, so that as it is written, ‘Let the one who boasts, boast in the Lord.’” (ESV)

THOSE Christians to whom the apostle directed this epistle, dwelt in a part of the world where human wisdom was in great repute; as the apostle observes in the 22nd verse of this chapter, "The Greeks seek after wisdom." Corinth was not far from Athens, that had been for many ages the most famous seat of philosophy and learning in the world. The apostle therefore observes to them, how God by the gospel destroyed, and brought to nought, their wisdom. The learned Grecians, and their great philosophers, by all their wisdom did not know God, they were not able to find out the truth in divine things. But, after they had done their utmost to no effect, it pleased God at length to reveal himself by the gospel, which they accounted foolishness. He " chose the foolish things of the world to confound the wise, and the weak things of the world to confound the things which are mighty, and the base things of the world, and things that are despised, yea, and things which are not, to bring to nought the things that are." And the apostle informs them in the text why he thus did, That no flesh should glory in his presence, etc.- In which words may be observed,

1. What God aims at in the disposition of things in the affair of redemption, viz. that man should not glory in himself, but alone in God; That no flesh should glory in his presence, --that, according as it is written, He that glorieth, let him glory in the Lord.

2. How this end is attained in the work of redemption, viz. by that absolute and immediate dependence which men have upon God in that work, for all their good. Inasmuch as,

First, All the good that they have is in and through Christ; He is made unto us wisdom, righteousness, sanctification, and redemption. All the good of the fallen and redeemed creature is concerned in these four things, and cannot be better distributed than into them; but Christ is each of them to us, and we have none of them any otherwise than in him. He is made of God unto us wisdom: in him are all the proper good and true excellency of the understanding. Wisdom was a thing that the Greeks admired; but Christ is the true light of the world; it is through him alone that true wisdom is imparted to the mind. It is in and by Christ that we have righteousness: it is by being in him that we are justified, have our sins pardoned, and are received as righteous into God's favour. It is by Christ that we have sanctification: we have in him true excellency of heart as well as of understanding; and he is made unto us inherent as well as imputed righteousness. It is by Christ that we have redemption, or the actual deliverance from all misery, and the bestowment of all happiness and glory. Thus we have all our good by Christ, who is God.

Secondly, Another instance wherein our dependence on God for all our good appears, is this, That it is God that has given us Christ, that we might have these benefits through him; he of God is made unto us wisdom, righteousness, etc.

Thirdly, It is of him that we are in Christ Jesus, and come to have an interest in him, and so do receive those blessings which he is made unto us. It is God that gives us faith whereby we close with Christ.

So that in this verse is shown our dependence on each person in the Trinity for all our good. We are dependent on Christ the Son of God, as he is our wisdom, righteousness, sanctification, and redemption. We are dependent on the Father, who has given us Christ, and made him to be these things to us. We are dependent on the Holy Ghost, for it is of him that we are in Christ Jesus; it is the Spirit of God that gives faith in him, whereby we receive him, and close with him.
Posted by Gregg Metcalf at 9:15 AM