Book Review: Faith and its Evidences, The Works of John Owen, Volume 5

Title:  Faith and its Evidences, Vol. 5 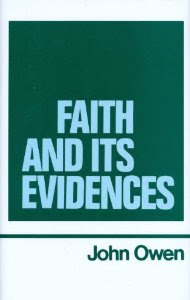 Owen writes:  "But where any persons are really made sensible of their apostasy from God, of the evil of their natures and lives, with the dreadful consequences that attend thereon, in the wrath of God and eternal punishment due unto sin, they cannot well judge themselves more concerned in any thing than in the knowledge of that divine way whereby they may be delivered from this condition."  (To the Reader)

Owen establishes his position by his expert exegesis of the biblical text. Owen uses these techniques in order to explain, confirm, and vindicate the truths of the doctrine of justification.

Even though this book was written by a seventeenth century divine, and by most accounts the most brilliant of theologians, I found this book to be extremely interesting. I found it to be absolutely accurate, and totally objective. This book is as difficult to read as any other book by our author yet it is again well worth the read.

This book is of utmost importance and value to the church today. The church today has seemingly lost sight of the doctrine of justification by faith. Owen's message is timely in the sense that it addresses issues that are faced some four hundred years after this time. Christianity is plagued with those who would confuse  the imputation of righteousness with the infusing of righteousness.

Owen's main argument is that God justifies sinners on the grounds or the basis of Jesus Christ's vicarious death on the cross. This justification excludes any work, effort, or contribution, on the sinner's part. Owen agree with the position of the Reformers that justification by faith is "the article of a standing or falling Church." Owen believed based on sound biblical exegesis that when a Church believed and preached justification by faith it would stand alive and vibrant, but if the church perverted this doctrine by the inclusion of any contribution on man's part the Church would fall into disrepute and loose the sovereign care and blessing of God.

The reader must take into consideration Owen's purpose was to defend this biblical doctrine. As in much of the writings that came from and out of the reformation period it contains some very controversial conclusions. After all Owen wrote during a time of Roman Catholic opposition and confusion with what became known as "Protestant" Churches.

This book had an profound impact on me. It did not change my position on justification by faith, however, it did solidify my thinking on the evidences of true salvation. If there is true salvation there will concrete and visible evidence of salvation. I fear that a good many churches today are filled with and even led by individuals who have never been justified by faith. Easy believism, Arminianism, and convoluted teachings on justification has filled churches with attendees and members who have never been saved. I did not change my ideas nor abandon any. This book served as a reminder that true faith and biblical justification by faith can and will be discerned by evidence.

John Owen was a noted pastor, lectured before English Parliament on a number of occasions, and Chaplain to Ireland and Scotland. He was an adviser to Oliver Cromwell (Lord Protector of England)

Faith and its Evidences format is an 8 3/4 x 5 1/2 x 1 1/4 hardback. The binding is library binding. The typography is small and single-spaced. There are no maps, no illustrations, or photographs.

This book has very few footnotes. There are no end notes, indexes, or bibliographies. The reader should be aware that Owen makes much use of Latin quotes and references without translation.

Owen summarizes his entire treatise with these words, Those who have lowest thoughts of themselves, and are most filled with self-abasement, have the clearest view of divine glory. The bottom of a pit or well gives the best prospect of the heavenly luminaries; and the soul in its deepest humiliations hat for the most part the clearest view of things within the vail.