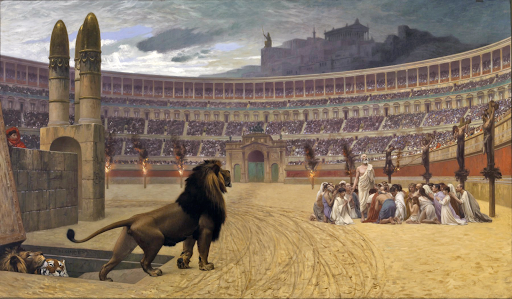 Battling for the Church has been a necessity since the very beginning of the church.

The Roman Empire became aware of Christianity approximately A. D. 30. At first, the Imperial rulers took no steps to interfere or stop what they perceived was an “off-shoot” of Judaism. The Roman Emperor Tiberius apparently thought that since the Christians were a major nuisance to the Jews and seemed to be at odds with the Jews, he hoped that this Christian sect might reduce the impact of the Jews on the Roman Empire.

Tiberius went to the Roman Senate and petitioned the Senate to declare the Christian sect legal and to declare Jesus to be a Roman god. The Senate refused. As a matter of fact, the Senate declared Christianity to be “an illegal superstition” which was a criminal offense under Roman law.

Christianity was now illegal. This did not deter Tiberius. He wanted this Christian sect to be an instrument in reducing the unrest and tension in his empire. He ordered Roman officials to cease any interference against Christianity. Tiberius’s policy was in effect for approximately thirty (30) years.

In A. D. 64, the Roman Emperor Nero began a wholesale persecution of the church, singling out believers for tremendous torture and death. Nero determined to make Christianity his scapegoat for the fire that had swept through Rome in July of A. D. 64 and for all other negative events which impacted Rome.

The people of Rome accepted Nero’s evaluation of the Christians in his empire. They believed that their gods would be angry and would punish the Romans. Christianity had been illegal for over thirty (30) years; therefore, it was not difficult for the public to accept the mass arrests, trials, and executions of the Christians. Many believers suffered horrific torture and death during this time. For several years Christians were to in fear of additional persecutions breaking out against them.

In A. D. 110, the Roman Emperor Trajan tried to reach some sort of a compromise between Christians and the Roman citizens who wanted Christianity destroyed. Trajan continued to allow Christians to be arrested, but he would not permit activities related to the search and seizure of Christians for arrest and trial. Trajan also gave orders that Christians be not interfered with when they gathered together.

So, for approximately 140 years, even though Christianity was still illegal, Christians were able to live relatively secure from persecution and could even practice their faith publicly. Rome for the most part left this troublesome sect alone.

This period of relaxed persecution unfortunately came to an end approximately A. D. 250. The Roman Emperor, Decius desired to revive the Roman pagan religion. He issued an edict that would clash with the beliefs of Christians. His edict was manifestly clear.

Every person living in the Roman empire were required to offer a sacrifice before the magistrates of their community - “for the safety of the empire.” Once a sacrifice was made, a certificate would then be issued certifying compliance with the emperor’s edict.

The certificate was in effect a pledge of loyalty to the gods of Rome. It also testified to the participation in both drink and food which had been offered to the gods in the presence of the officials. Many Christians refused to comply and would not offer sacrifices. This refusal resulted in their torture and death.

Fortunately, Decius did not live long after publishing his edict. He became the first Roman emperor to die in battle against an enemy. Decius died during the Battle of Abritus in June of A. D. 251. His successor Gallienus put a stop to the persecution of Christians. Not only did Gallienus put a stop to open and hostile persecution, he declared Christianity to be a legal religion. He hoped that this action would garner religious peace in his empire.

For approximately thirty (30) years the church enjoyed a period of rest from active and hostile persecution. There were various persecutions on the local level from time to time. But for a time, Rome ceased to persecute the church as an empire wide policy.

Approximately A. D. 284, Diocletian became Emperor. Even though his wife professed to be a Christian, he began once again the open and hostile persecution of the church. After nearly fifty (50) years of the cessation of persecution, Christians were once again being destroyed by the Roman empire. This persecution was intense. Diocletian’s plans included the absolute destruction of Christianity in his empire. Although Diocletian due to illness resigned the Imperial throne, his successors continued the persecution through approximately A. D. 311.

The persecution of the church continued under Galerius.  In A. D. 311 Galerius became severely ill. He issued an edict that cancelled the persecution of Christians. From this point and time, no Roman Emperor ever persecuted the church again. In approximately two (2) years something far more sinister, far more devastating, and far more dangerous to the church would emerge on the scene. But alas, that is for next time
Posted by Gregg Metcalf at 2:31 PM

Gregg Metcalf
Gregg Metcalf has served as the Teaching Pastor of Surprise Valley Baptist Church (Cedarville, CA) and the Mirror Lake Baptist Church (Federal Way, WA.) He graduated from Shasta Bible College in 1989. Gregg is married to Irene and the Lord has blessed them with four daughters and six grandchildren, and a great grandson. Gregg invites your comments and interaction concerning his posts and this blog! Gregg enjoys teaching, reading, boating, song-poem writing, and his family.

Catching up with my comments Gregg. Enjoyed the read.