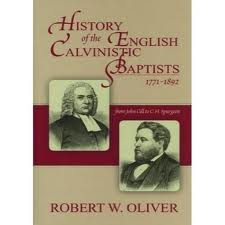 General Subject Matter:  Historical narrative delineating differences and principle spokesmen between closed and open communion among Particular and General Baptists during the period of 1771-1892

The purpose of this book is to trace the story of the English Calvinistic Baptists from the death of John Gill in 1771 to that of Charles Haddon Spurgeon in 1892. So states the author in the dust jacket notes and in his introduction. Oliver asserts that no Christian community exists without some type of controversy. Oliver details the controversies that developed at this time.

The theme of this book is the development of Strict and Particular doctrines and practices.

The thesis of this book is that even though the emergence of two distinct Baptist denominations out of English Separatism which differed in the proper candidates which could be received as communicants at the Lord’s table, the Strict Baptists (Particular Baptists) and General Baptists.

The author uses a combination of narration and exposition to develop his thesis. The author tells the story of a series of events, developments, and changes that took place after the death of the historic pastor John Gill through the death of another historic pastor, Charles H. Spurgeon in a chronological order. Oliver emphasizes various events to tell his readers about the various developments and what factors precipitated them.

Oliver also uses exposition to explain each event and its significance. Oliver also gives excellent analysis of these events. The author attempts to present the facts as clearly as possible. These facts range from the development of doctrinal papers, establishment of various churches, the calling or dismissing of various pastors, and other essential events from both “camps.”

This book was very interesting. Oliver, although unafraid to admit his bias, was very objective and very thorough in his presentation. Oliver was extremely detailed. This book is very useful to its intended audience as it provides extensive research explaining how various churches developed strict or open communion practices and how they changed during the period of 1771-1892.

Oliver seems to not only defend the position of strict or closed communion but he seems to defend and uphold “hyper-Calvinism.”  He seems to venerate men such as Gill, Gadsby, Philpot, Fuller and Booth who were seemingly hyper-Calvinists.

I would agree with Oliver that communion is preceded by believer’s baptism. I agree with the author’s opinion that the doctrines of grace are biblical doctrines taken straight from the pages of the Scriptures. I agree that only adult candidates who profess and demonstrate conversion should be baptized.

Oliver divides his book in to three distinct sections. Part One is a detailed history of what Oliver calls “the eighteenth-century heritage.” He examines the life, ministry, and contribution (good or bad) of a number of eighteenth century men. Oliver also details controversies such as antinomianism. Part Two details the differences of three prominent men who preached and wrote extensively on the questions and issues of their day; Andrew Fuller, Abraham Booth, William Gadsby, and John Stevens. Part Three begins with the movement toward open communion, the question of the free offer of the gospel, the impact of both John C. Philpot and Charles H. Spurgeon on these issues.

Robert W. Oliver pastored the Old Baptist Church in Bradford on Avon in Wilshire for over thirty-five (35) years. He was a frequent lecturer on Church History in the London Theological Seminary.

This book is a hardback copy. The layout of this book makes it very reader friendly. The typography is very easy to read. There are a number of black and white renditions and sketches of a number of principle men connected to this period and these controversies.

In summary, Oliver detailed the development of the Strict and Particular brands of the church community in the nineteenth century. He believed it was not a “stagnant backwater that is best forgotten,” but needed to be recorded for great benefit today. Oliver contended that there was a “spiritual vitality” to this group (English Calvinistic Baptists) that needed to be remembered. Oliver skillfully provided a very detailed and useful overview of both the thought and activities of this group of believers.

I found this book to be very interesting and informative. I find it difficult to do a general summary of this book due to the fact that Oliver made each chapter stand on its own. The chapter titles are as follows:

The main topics of this book are:

Who may take the Lord's Supper?

"From the seventeenth century onwards, Baptists had debated the question of whether communion should be closed or open, but it was not until the nineteenth century that differences over this issue led to distinct Strict Baptist groupings." (page 58)

"The Particular Baptist denomination remained divided on terms of communion but the two sides within the communion was not settled." (page 87)

What is the role of the law in the Christian life?

John Gill wrote, "[The Law] (sic) is of use to saints and true believers in Christ...to be a rule of life and conversation to them; not a rule to obtain life by; but to live according to; to guide their feet, to direct their steps, and to preserve them from going into bye and crooked paths." (page 112)

Is there a biblical warrant for making free offers of the gospel to all and sundry?

Andrew Fuller wrote in 1815, "I have preached and written much against the abuse of the doctrine of grace; but that doctrine is all my salvation and all my desire. I have no other hope than that from salvation by mere, sovereign and efficacious grace, through the atonement of my Lord and Savior. With this hope I can to into eternity with composure." (page 89)

Andrew Fuller's publishing of The Gospel Worthy of All Acceptation in 1785 was a powerful challenge to the prevailing Hyper-Calvinism within the Particular Baptist Churches. William Button and John Martin had been heavily influenced by John Gill. Button was compelled to denounce Fuller's publication, charging Fuller with Arminianism. Button wrote:


I received a complimentary copy of this book from The Banner of Truth Trust for this review and nothing else. The opinions offered in this review are mine and I was not required to offer a favorable opinion.

Thanks for the review, Gregg. I didn't realize the names you mentioned were hyper-calvinist.

Spurgeon was not a hyper-calvinist, he was included to show the opposition to the hyper-calvnists, I should have made that more clear, sorry. But Gill, Gadsby, Booth was. Fuller probably was even though he tried to hold a modified position of a free gospel offer.

Hi I'm back not achieved much but decided to start blogging again.
Again a wonderful post Gregg.
Hope you and yours are ok.