1.  Statement of essential information
Title:  Why Men Hate Going to Church
Author:  David Murrow
First Copy Right Date:  2005, Revised and Updated 2011
Type of Book:  Christian Living, Spiritual Growth, Pastoral Leadership, Men
Binding:  Paperback
Price:  $15.99
ISBN:  978-0-7852-3215-5
2.  The Author’s Purpose
The purpose of this book is to serve as a map through a minefield loaded with triggers, trip wires, and booby traps which are buried deep in Christian culture in order to recognize them and remove in order to prevent men from encountering God, beginning growth in faith, then stepping on a land mine leaving the church with destroyed faith.
3.  The Theme and Thesis
Theme:  The effects of cultural icons on men’s lack of attendance in church
Thesis:  Cultural icons built into the church structure are the major reasons that force men to drop out of church attendance and activity
4.  The Method of Development and support of the thesis
Murrow uses a combination of explanation and argumentation to develop his thesis. Murrow builds his case against cultural icons that detour men’s church attendance rather than enhance it by analyzing statistics, reports, numbers, and surveys regarding men’s church attendance. Murrow rarely uses Scripture to support and point of his argument. He uses what I believe to be skewed and somewhat suspect sources to make his point. Murrow uses strong arguments in his attempt to persuade the reader of the truth of the analysis and problems caused by the cultural items built into the church.
5. Evaluation for interest, accuracy, objectivity, important and usefulness
Murrow’s main arguments of why men are not either attracted to the church or remain consistent in church attendance/activity are twofold. First, he states that the church does not provide a return on the investment that men make in the church. Murrow sums that argument up with the thought that, “there are better offers out there.”
Second, Murrow states that the church is designed to reach women, children, and the elderly. He argues that Christianity’s primary delivery system, which is the local church, is perfectly designed to provide the results that the local church is receiving. In other words, Murrow argues if you look in the average church today – from the bulletin, to bulletin boards, to programs, and etc., you will find the church caters to women, children, and the elderly. Murrow furthers argues that if a church does make an attempt at reaching men or structuring a men’s ministry it will be highly feminized due to the influence of the women in the church. 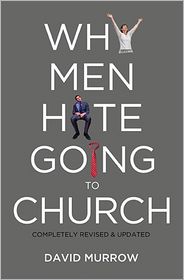 Haven't read the book. Don't intend to. It's yet another in a line of "pragmatic" approaches to ministry: "how can we get 'em in?" The truth is, I'm not interested in getting men to come just so they can beat their chest, swap hunting and fishing stories, any more than we try to reach women just so they can do crochet, compare tea sets, or whatever. Preach the Gospel! Men don't come because their hearts are depraved and they want what their sinful flesh wants. We need to stop giving in to secular humanistic understandings of "male" vs. "female" and gearing our approaches to meet those sinful stereotypes, and just preach the Word; let God handle the results; which is hopefully changed hearts.
(I'm trying to imagine the conversation where Paul goes into a city and says, "You know, what would really draw men here is a good gladiator fight. Yeah, that'll bring 'em in and then we'll preach at 'em. Pragmatism isn't Biblical!)

I ran into an interesting webpage named FIFTY WAYS TO MAKE YOUR CHURCH MORE APPEALING TO MEN. Here are a few ways from his list:

+ Lots of signs so men don’t have to ask directions
+ Keep the focus on God – not the family
+ Remove the “old lady” stuff: quilts, felt banners, needlepoint, etc.
+ Do not ask the congregation to hold hands
+ Choose songs that convey respect to God
+ Avoid wimpy “love songs to Jesus”

I do think that some things turn men off and church leaders should be sensitive to wheat those things are.

Gregg, I read your review a couple times and wanted to address a couple of your points.

As it relates to the mega church issue: Murrow never said the mega church was right on all counts. In fact, he did say that whether a person agrees with the m-c approach or not is not the issue, but simply that they are getting something right by attracting lots of men. He didn't suggest all churches adopt the model. He simply hoped to inspire them to reconsider their approaches.

As it relates to Scriptural examination. I'm wondering why not you say this book wouldn't withstand examination. Simply because he "rarely" cites scripture, as you say, does not mean he doesn't have scriptural support or foundation. Did he intend or need to write a theological treatise in order for it to pass muster? He found much support for his approach in the bible.

As it relates to strategy and discipling. Murrow spent the last section of the book addressing these. In fact, I think it was chapter 23 or 24 that was specifically about discipling men. He even wrote a chapter about discipling boys. I saw many examples given for how the reader could strategically approach the issue.

First, their writings, their examples, their illustrations are usually man centered and not God-centered. I think that this is becoming an art or a science much like biblical hermeneutics in discerning the difference. Many who claim to be God centered are man-centered by their pramatic methodolgy. Second, their writings, examples, illustrations are more about culture, it is about them, their insihts and their ideas and as such it lowers biblical standards. God's word is not central - and no, you don't need to right a theological treatsie to be heard today, quite the opposite, if you right one no one wants to read it. I don't think they have a biblical view of the church. I am not sure that Murrow has a clear understanding, at least it was not given in this book.

As a result the scripture is not dominant, or the priority. You can trace back this low view of Scripture through some of these leading men thru their guru's, Warren to Hybels, Hybels to Schuller, Schuller, to Peal. As a cop, and I don't use that word disrespectfully, I highly honor and respect you and the force, every and any force, you should know how much man hates authority.

The first step was changing the wooden, massive, authoratative sacred desk into some plexiglass lectern. That led to the eventual removal of the pulpit in most churches. Now you are lucky if you get a music stand to preach from. Taking the communion table out of the building? That truly helps a man to worship? I was somewhat surprised when Murrow took a shot a the songs of late. I have said for years they are girlish romantic love songs that are no different than what is on AM radio. I was glad to see that.