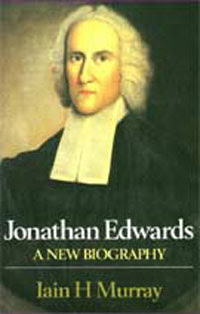 Jonathan Edwards: A New Biography
Iain Murray The Banner of Truth Trust D. Martin Lloyd-Jones wrote of Jonathan Edwards: “No man is more relevant to the present conditions of Christianity than Jonathan Edwards... He was a mighty theologian and a great evangelist at the same time. If you want to know anything bout true revival, Edwards is the man to consult. My advice is read Jonathan Edwards. Go back to something solid and deep and real.” Murray records these words in his preface; “Imperfect as it is, it has cost me much time and labor; much more than I thought of when I undertook it’, so writes Samuel Hopkins on the completion of his Life and Character of the Late Reverend Jonathan Edwards in 1761. Subsequent writers on Edwards have probably all experienced similar difficulty.” The book is well done, an easy and exciting read about this legendary pastor, theologian, and College President. It is one of those stories that grips you and you can not put it down until long after your eyes are tired and strained from trying to squeeze out every word from each page. Jonathan Edwards: A New Biography begins with an introduction that is designed to help us understand the man who is the subject of this great book. A number of descriptions and opinions are drawn together for your consideration from previous biographers and writers. The book then develops the life, background, ministry, and accomplishments over twenty three chapters. This book consists of four hundred seventy two pages with the addition of four appendixes. Strengths: The first thing that I appreciated about this book is it’s seeming affinity with Mr. Edwards. Murray writes with a great respect and appreciation of this noble man. Murray also seems to possess some wonderful insight into the character and nature of Edwards that helps one to see Edwards as a living, breathing, red-blooded human being. This book also is a very easy read. It has certainly been painstakingly researched, yet it is not stuffy, stodgy, or void of “spirit.” Both the story and the character live and it is easy to befriend Edwards as Murray moves through the various stages of his life. A third strength comes from the dustcover itself. The dustcover reads, “Murray believes that Edwards cannot be understood apart from his faith. Only when seen first and foremost as a Christian does his life and writings make sense.” Murray does allow Edwards to speak for himself without forcing a personal bias or interpretation upon him. Murray sums up his book with what seems to be three definitive statements: “The propensity of Edwards’ Works to regain attention and to re-assert their message is an historical fact worthy of notice. More than once, as we have seen, they have been forgotten and judged obsolete only to re-appear afresh with new power and significance. “The key to understanding Jonathan Edwards is that he was a man who put faithfulness to the Word of God before every other consideration. At critical points in his life, most notably in not deferring to the ‘advice’ of Israel Williams in 1734, and again in the communion controversy of 1749-50, he put the truth first.” “The ministry of Jonathan Edwards is, very clearly, not yet concluded. He is being read today as he has not bee read for over a century and in more countries than ever before."
I highly recommend this book. It will be a beneficial addition to any serious library. I can not find any criticisms to add to this review. I am sure some one will find at least one, but I was well pleased with the material, the manner in which it was presented, and the mission accomplished by that of Ian Murray.
Ian Murray is a prolific writer, has been in Christian ministry since 1955, served as an assistant to Dr. Martyn Lloyd-Jones. Murray is the co-founder of the Banner of Truth Trust. He has served at Westminster Chapel, Grove Chapel, and St Giles Presbyterian Church.
Posted by Gregg Metcalf at 2:53 PM